In 1972 Frederik IX could have celebrated the 25th anniversary of his accession to the throne, but The King died on 14 January after short term illness.

Frederik IX began nearly 25 years of kingship for Denmark on 20 April 1947, when The King stepped out on the balcony of Christiansborg Palace and gave his proclamation speech to the thousands of people who had gathered at Christiansborg Palace Square: “I hope to be able to make myself worthy of the people’s trust”. With the motto “With God for Denmark”, The King led the Royal House of Denmark through one of the biggest and fastest transition periods in Denmark’s history.

In 1935, Crown Prince Frederik had married Princess Ingrid of Sweden in the Cathedral in Stockholm, and, after the wedding and the festivities in the Swedish capital, the new Danish Crown Prince Couple sailed on the Royal Yacht Dannebrog to Copenhagen, where the capital’s citizens and visiting Swedes welcomed the country’s new Crown Princess. From the balcony of Christian VII’s Palace at Amalienborg, Crown Prince Frederik spoke to the large crowd: “Many thanks to all for the splendid reception you have given me and my bride today. Then let my first act after bringing my bride here, be, together with all of you, to call for a cheer for our Fatherland. Long Live Denmark!”

Throughout The King’s reign, Queen Ingrid was a great support for Frederik IX and a focal point for the royal family. Together, The King and The Queen carried out a transformation of royal power to primarily function as a symbolic expression of the nation’s unity and historical continuity. Their openness was well-suited to the new social conventions and new media, and the Royal Couple gladly let the public have insight into their family life with the three daughters.

As crown prince, Frederik IX had broken a long tradition in the Royal House of Denmark by training in the Navy instead of the Army. “In the Navy, he learned how one conducts himself towards his people. A ship’s captain is the commander of the whole ship”, HM The Queen has said about her father’s long career as a naval officer, which came to characterize his style as king to a great extent.

With a personal style marked by directness and spontaneous friendliness, Frederik IX managed to achieve a balance between closeness and the dignity befitting the head of state. In addition, The King, who both conducted and played the piano, had a distinct love of music. “When I was small, record discs were often put on that there fun to move around to, and so I moved around in the drawing rooms and danced”, The Queen has said about childhood in the musical home.

The nearly 25 years that Frederik IX reigned are encapsulated by two crucial turning points in Denmark’s modern history: From the post-war period in the wake of liberation from the German occupation in May 1945 to the referendum on the country’s entry into the European Economic Community (EEC) in 1972.

In 1972, Frederik IX would have been able to celebrate the 25th anniversary of his accession to the throne, but The King died on 14 January after a brief illness. The King’s death felt like a great loss for the Danish people, and The King’s funeral later the same month was followed by hundreds of thousands of people on the streets and roads, and by even more on TV. 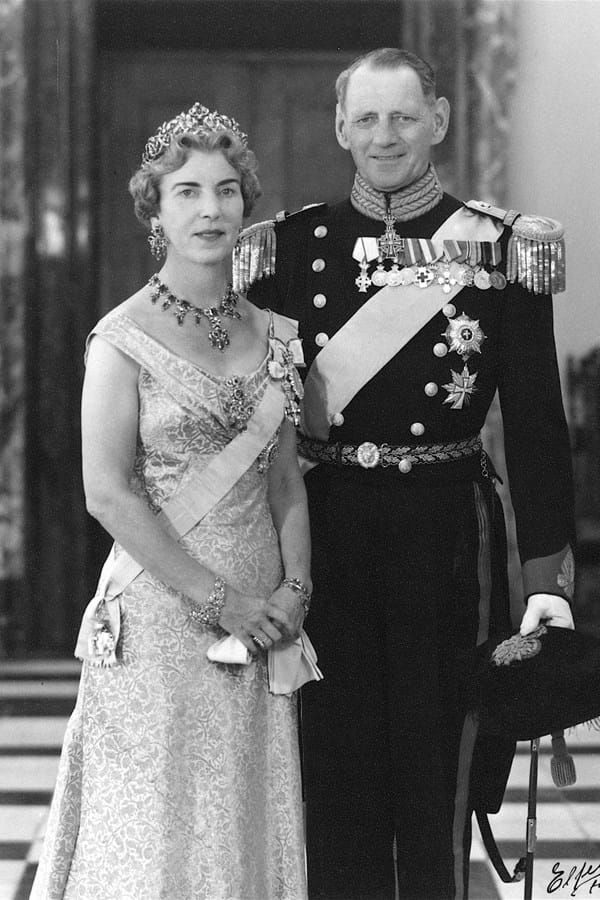