The history of the Danish Monarchy
The Danish Monarchy can be traced back to Gorm the Old (d. 958). The monarchy was originally elective, but in practice the choice was normally limited to the eldest son of the reigning monarch or closely related. In turn, from the end of the 1200s, the king had to sign a coronation charter that curbed the king’s power.

When absolutism was introduced in 1660-1661, the elective monarchy was replaced by inherited monarchy. The succession, which was based on the principle of male primogeniture, was laid down in Lex Regia of 1665, which also regulated the Royal House’s domestic relations in other ways. The democratic constitution of 5 June 1849 changed the monarchy’s status from absolute to constitutional. The Act of Succession of 27 March 1953 allowed for the possibility of female monarch; that is what enabled HM The Queen to accede to the throne in 1972.

In 2009, The Act of Succession was amended so that the eldest child (regardless of gender) succeeds to the throne. 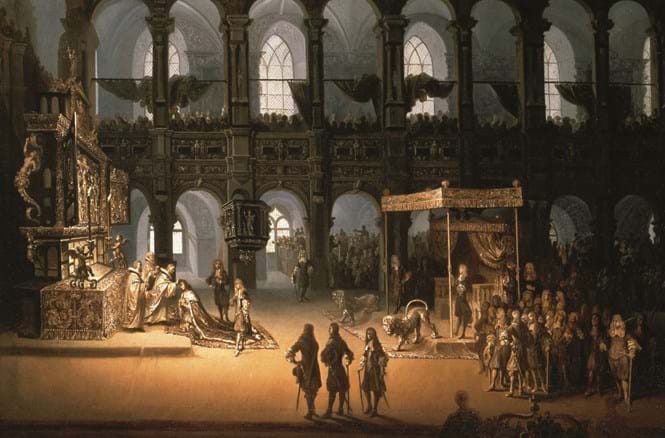 The House of Oldenborg
The direct lines of the ancient Danish dynasty became extinct with the death of Christoffer III in 1448. That same year, Duke Christian of Oldenborg was chosen to be the King of Denmark and took the name Christian I. He belonged to one of the side branches of the original dynasty and became the founder of the Royal Family of Oldenborg, which reigned until 1863 when the last sovereign of that line, Frederik VII, died childless.

The House of Glücksborg
In accordance with the Act of Succession of 1853, the throne passed to Frederik VII’s relative, Prince Christian of Glücksborg, who was a direct descendant of the Royal House. He acceded to the throne as Christian IX and became one of the longest reigning monarchs in Denmark (1863-1906). He was also the first monarch of the current House of Glücksborg. Christian IX eventually became known as the ¨father-in-law of Europe¨. His daughter, Princess Alexandra, married Edward VII of England.

Another daughter, Princess Dagmar, married Czar Alexander III of Russia. And yet another daughter, Thyra, married Duke Ernst August of Cumberland. In 1863, his son, Vilhelm, became King of the Hellenes (known now as Greece) and took the name, George I. And in 1905, Christian IX’s grandson, Carl, became King of Norway as Haakon VII. The Royal House of Denmark was thus directly related to many of Europe's reigning royal houses.

Christian IX’s son, Frederik VIII, was 63 when he finally acceded to the throne in 1906. When he died in 1912, he was succeeded by his eldest son, Christian X, who was King of Denmark throughout both World Wars. He is remembered as the "Equestrian King" because of his ride across the old border into the province of North Schleswig after its reunification with Denmark in 1920, and he became very popular during the German occupation of Denmark between 1940 and 1945 when, every day, he mounted his big white horse and rode through the streets of Copenhagen.

Christian X died in 1947 and was succeeded by his eldest son, Frederik IX, who had married the Swedish princess, Ingrid, in 1935. They had three daughters: Princess Margrethe (b. 1940), Princess Benedikte (b. 1944), and Princess Anne-Marie (b. 1946). When Frederik IX died in 1972, his eldest daughter was proclaimed as Her Majesty Queen Margrethe II.

In 2013, the Glücksborg line of the Royal House of Denmark was able to celebrate 150 years on the Danish throne.