Several sculptures are included in the royal collections: Classical, life-sized statues in bronze or marble, busts of royal personalities, small decorative sculptures in porcelain or metal, and exotic African figures in wood and pearl. The sculptures are found in palaces, gardens and in the squares that surround the royal buildings.

Best known is Jacques-François-Joseph Saly’s equestrian statue of Frederik V in the Amalienborg Palace Square. The statue stood completed in 1771 and portrays the king as a powerful Roman ruler with a laurel wreath symbolising the absolute monarch’s rule. The statue was raised as a congratulation to the king in the centre of his new quarter of town, Frederiksstaden. The equestrian statue of Frederik V is considered one of the world’s most perfect and was included in the Danish culture canon in 2006. 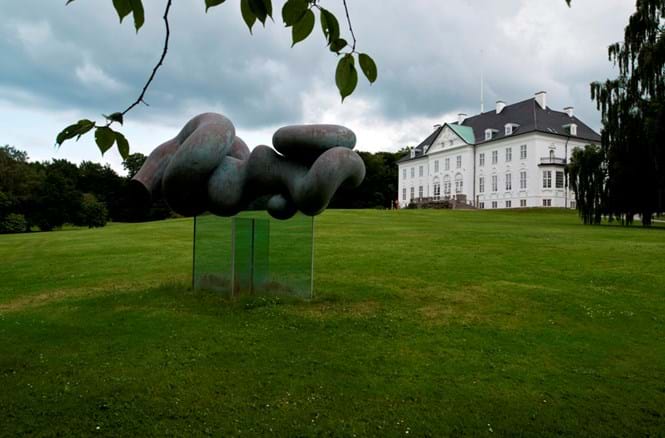 Inside the palaces at Amalienborg are several sculptures that, like the equestrian statue, support the architecture and make up a part of the permanent lay-out with both a decorative and a symbolic function. In Christian VIII’s Palace, the niches of the Great Hall are adorned with Bertel Thorvaldsen’s marble sculptures of Euterpe and Terpsichore, Greek mythology’s muses for music and dance, which seem an appropriate choice for a ceremonial hall.

The more curious sculptures in the royal collections belong to Rosenborg Palace’s small, but well-preserved, group of wax busts from the 1600s and 1700s. The very life-like, life-sized figures represent, among others, Frederik III and Queen Sophie Amalie, fashionably clad and coiffed in the style of their period, and the queen even wears imitation jewels made of wax and covered by pulverised fish scales.

In the residence palace at Amalienborg, many of the collection’s modern sculptures can be found; among others are Hans Pauli Olsen’s busts of HM The Queen and Prince Henrik and their two sons.

The Royal House’s largest publicly-accessible collection of modern sculptures is found in the park by Marselisborg Palace. Here, through several decades, The Queen and Prince Henrik have gathered some 30 modern sculptures, including a five meter high vase by Peter Brandes along with works by, among others, Piet Hein, Robert Jacobsen, Poul Isbak and Jens Flemming Søren in company with some sculptures by Prince Henrik himself.