In 1694, Christian V built a two-story timber frame house in the Deer Park north of Copenhagen. In 1734, that building was demolished, and in the period 1734-36, royal architect Lauritz de Thurah built the existing hunting seat on the hilltop in the middle of the plain.

The palace is an distinguished example of de Thurah’s architectural skills and one of the late Baroque’s best works in Denmark. The ground-plan of the palace is symmetrical on all four floors.

The kitchen is located centrally in the basement under the dining room. Along the south gable, the beautiful staircase goes through the whole house. The stairwell is covered in tiles with hunting motifs. The tiles were produced at the factory on St. Kongensgade.

The bel étage houses the large dining hall, the grandest room with rich decorations in marble, plaster, mirrors and marbled wood. The two southern rooms are in a striking late Baroque style, whilst the three northern rooms, the king’s and queen’s rooms, are in Rococo style. The central room on the top floor is the servants’ sitting room. 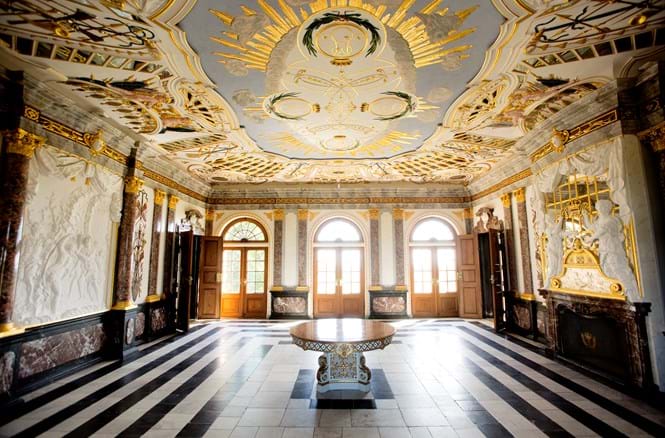 In the dining hall, there originally was a so-called Hermitage table, a table machine which, by use of a hoisting device, allowed the well-provided table to rise up from and afterwards down to the underlying kitchen through a hatch in the dining hall’s floor, so that one could dine without servants, or, in French, “en Hermitage”. This machine was removed in the middle of the 1700s.

The Palace has been renovated several times. During the years 1979-1991, the palace underwent a thorough restoration of its exterior sandstone. In the restoration of the palace’s interior from 2009-2013, there was special attention on the original color scheme from the 1700s, among other things.

The Hermitage Palace has, through the years, been the centre for royal hunts. It is at the disposal of The Queen, who today uses it for official lunches.