Fredensborg Palace was built as a country seat for Frederik IV by the architect J.C. Krieger. Construction began in 1719. The main building was first used in 1722 and the chapel in 1726.

It was rebuilt and expanded during the reigns of Christian VI and of Frederik V and Queen Juliane Marie by the architects N.Eigtved, L. de Thurah and C.F. Harsdorff.

After Queen Juliane Marie’s death in 1796, the palace was rarely used. It was not until the reign of Christian IX and Queen Louise that the palace again became the setting for the Royal Family’s life for lengthy periods. “Europe’s parents-in-law” gathered their daughters and sons-in-law, all of whom represented many of Europe’s royal and princely houses, at Fredensborg Palace every summer.

Now, HM The Queen uses the palace for three months in the spring and three in the autumn.

Fredensborg Palace is often the setting for important events in the life of the Royal Family. It is here they celebrate weddings, silver wedding anniversaries and birthdays. The Queen receives heads of state from all over the world at Fredensborg Palace during official visits, and here too, ambassadors from foreign countries present their credentials to The Queen. During state visits, there is a tradition of having the visiting head of state scratch his or her name on a pane of window glass with a diamond.

Fredensborg Palace Garden is one of Denmark’s largest Baroque gardens and was rearranged in the 1760s under Frederik the 5th. A distinctive element in the garden is the main axis at Brede Allé, which originates from the palace’s garden hall.

The palace garden covering nearly 120 hectares was laid out by J.C. Krieger with, among other things, seven avenues, which radiated out in fan shape from the palace and cut through the surrounding forest. The garden was rearranged by Nicolas-Henri Jardin in the 1760s and, among other things, was adorned with an impressive program of sculptures by the sculptor Johannes Wiedewelt. In the 1800s, the garden was rearranged in keeping with the tastes of the period, and many of the garden’s 15 kilometers of avenues were eliminated.

In 2009, the Agency for Culture and Palaces, with support from the A.P. Møller and Chastine Mc-Kinney Møller Foundation for General Purposes, began the restoration of Brede Allé at Fredensborg Palace. In connection with the restoration, the old avenue trees have been replaced, and the double avenue has been recreated in a simplified form. At the same time, the garden’s sculptures and monuments have been restored or recarved, and the parterre, which is the large semicircular space in front of the palace, has been recreated. In addition, two distinctive garden spaces in immediate connection to this place, “Ballonpladsen” and “Vinhøsten”, have been recreated. The opening took place at Fredensborg Palace on 17 September 2013 with the participation of The Queen and Prince Henrik. For the restoration work, the Agency for Culture and Palaces received the “European Heritage Award/ Europa Nostra Award" in 2021 from the European restoration organization Europa Nostra.

In the “Valley of the Norsemen” stand 68 sandstone figures representing Norwegian and Faroese farmers and fishermen. These figures were originally carved by the sculptor J.G. Grund. They were recast and recarved at the end of the 1900s. 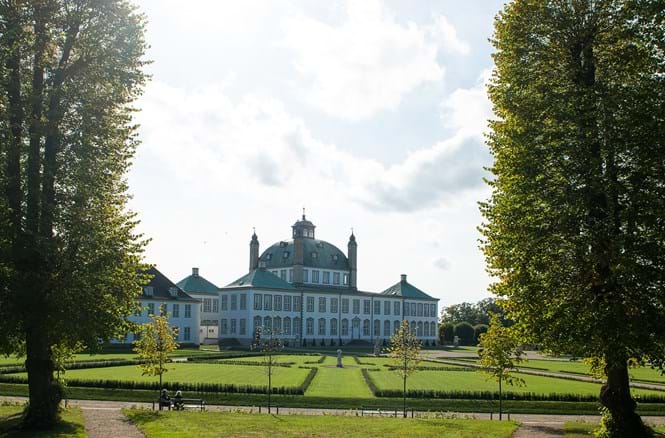 In 1995, an orangery was built in connection with the palace’s kitchen garden. Here, delicate plants are kept during the winter, and flowers are grown for decoration of the palaces.

When Fredensborg Palace was built long ago, there was also an orangery belonging to the palace. At the time, it was located between the palace and the church, but it was replaced by other buildings over time. Today at Fredensborg Palace, there is a new, modern orangery, which was created in 1995 in connection with the palace’s kitchen garden.

The pride of Fredensborg Palace Garden are the old, pruned myrtles, which originally stood in The King’s Garden but were moved to Fredensborg Palace in 1909. In the winter, the palace garden’s potted plants such as, for example, citrus and myrtles are kept in the Orangery, where there is also production of flowers for decoration of the palace and small plants for planting in the kitchen garden.

There are approximately 350 plants of various sizes in pots and vessels in the Orangery, which among other things include 14 large citrus trees, 17 Seville orange trees in large Versailles wooden boxes, 50 laurel plants, and 75 myrtles.

In extension of Fredensborg Palace is the associated palace chapel, which was built between 1724-1726 by the architect J.C. Krieger.

The palace chapel’s altar was created by the sculptor Friedrich Ehbisch, and the altarpiece’s picture “Day of Judgment” was painted by Henrik Krock. The altar’s silver was produced for the church’s consecration in 1726 and was also ornamented with Frederik IV’s crowned mirror monogram. In 2006, the palace church’s ceiling was decorated with a 8.5 x 3.5-meter ceiling painting by artist Per Kirkeby.

The Queen has maintained the centuries-old tradition that the chapel should be open for members of Asminderød-Grønholt parishes, and a public church service is held almost every Sunday.

On the south side of the newly rebuilt riding ground facility at Fredensborg Palace lies the Chancellery House. The low wing, which is connected to the main palace via the stable buildings and the chapel, frames the eastern part of the palace complex.

The building was erected in 1731 during the reign of Christian VI for the king’s ministers and government officials and was therefore originally called the Chancellery House.

Since then, the name has changed to the Chancellery House, presumably because the Chancellery, which was the uppermost, central administrative and governing body in Denmark, stayed there when the king resided at Fredensborg Palace.

The Chancellery House was built by architect J.C. Krieger, who was also responsible for the main palace. The Chancellery House’s architecture and interiors are in Baroque style with references to the French régence style. A nice detail in the simple facade of the building are the flat, decorative columns, where, at the top, you can see the building owner’s monogram, C6, between two elephant heads – the symbol of strength and wisdom, and in Denmark known from our oldest and most distinguished order of chivalry, the Order of the Elephant.

Inside, the Chancellery House contains at each end a six-meter-high little hall in quadratic form with a domed ceiling. The spaces were thought of as common living and reception rooms for Christian the VI’s court, and around each of the two halls there are four flats consisting of two small rooms, where the courtly gentlemen lived when they were at Fredensborg on government business. Today, the Chancellery House’s old floor plan is preserved with few changes, and you can still see details from the building’s earliest times. Among these are beautiful stucco ceilings in régence style, paneled doors with decorative fittings in wrought iron, high wall panels and, in a pair of the small rooms, painted canvas wallpaper in Chinese style.

After Christian VI's time, the Chancellery House continued to function as offices and residences for the uppermost members of the court, but from around 1800, Fredensborg Palace, and thus the Chancellery House, became seldomly used because Christian VII and his son, who later became Frederik VI, preferred Frederiksberg Palace for their summer residence. The whole palace complex fell into disrepair, common families with no connection to the court moved into the octagonal buildings, and the Chancellery House was even converted into a military hospital from 1807-14 during the wars with England.

In 2019-2020, the Agency for Culture and Palaces re-established Fredensborg Palace’s original Riding Ground from the 1720s, and sections of the old stables were restored at the same time.

When Frederik IV built Fredensborg Palace approximately 300 years ago, there was a need for space at the palace for the Royal House’s various livestock. In the 1700s, horses were especially useful for work and an important means of transport, and, at the same time, the royal family had an extensive stud operation with the coveted Frederiksborg horses. The king’s finest horses were kept closest to the palace, and therefore, in the area between Fredensborg Palace Chapel and the Chancellery House, a riding ground and accompanying stable were built

The ground had been closed down for many years. But, in connection with The Crown Prince’s 50th birthday on 26 May 2018, the board of the A.P. Møller & Chastine Mc-Kinney Møller Foundation granted a sum for re-establishment of the historic old riding ground. In addition, the foundation granted funds for restoration of parts of the Long Stable at Fredensborg Palace.

The re-established historic riding ground and Long Stable is used by the Royal Mews, the Guard Hussar Regiment and the Royal Family. According to international standards for a dressage arena, the riding ground measures 20 x 60 meters. With inspiration from old paintings, during the re-establishment phase a low, red-painted wooden fence was built around the riding ground, which is surrounded by a grass border and a beech hedge. The Long Stable was last renovated in 1914 during Christian X’s time and therefore was in need of a makeover, and the whole restoration was carried out as considerately as possible and with respect for the historical geometry and color scheme. As a new element, there are boxes instead of stalls so the horses can be stabled according to current regulations. 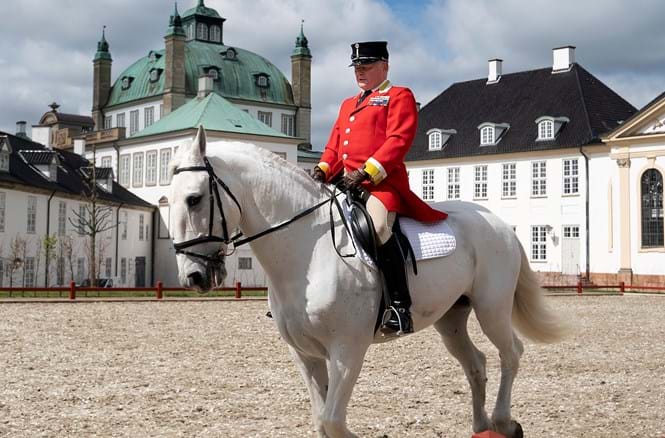 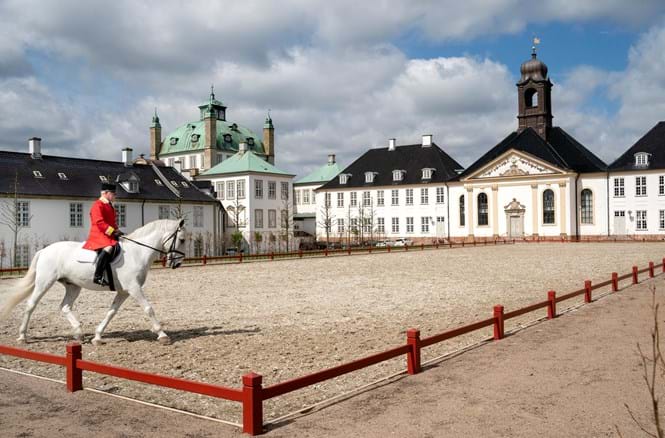