Amalienborg is HM The Queen's winter residence. The Amalienborg complex consists of four palaces, built around an octagonal courtyard, in the centre of which stands the French sculptor J.F.J. Saly’s equestrian statue of Frederik V, the founder of Amalienborg and Frederiksstaden.

The complex was constructed by Frederik V on the occasion of the 300th anniversary of the coronation of Christian I, the first King of the House of Oldenborg. The site for the four palaces was given to four prominent noblemen, A.G. Moltke, Christian Frederik Levetzau, Joachim Brockdorf and Severin Løvenskiold, who committed themselves to building identical palaces, designed by the court architect Nicolai Eigtved.

Amalienborg became the royal residence after Christiansborg Palace burned down in the night between 26 and 27 February 1794. In the course of a few days, the king acquired both the Moltke and Schack Palaces. 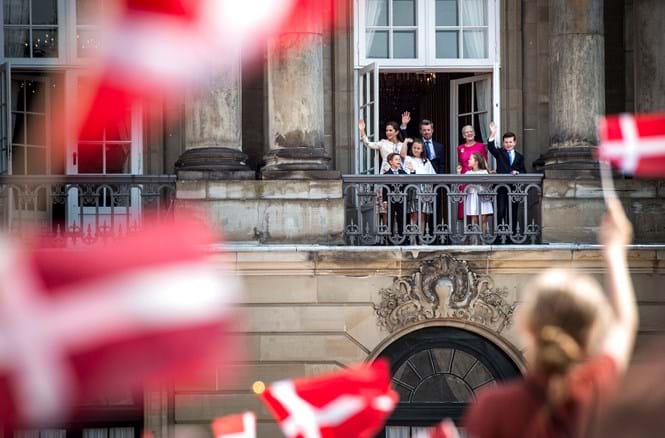 The Queen and The Crown Prince Family at the balcony on the occasion of HRH The Crown Prince's 50th birthday. Photo: Sofie Mathiassen, Ritzau Scanpix ©
Amalienborg Palace Square. Photo: Polfoto ©

Christian VII’s Palace, or Moltke’s Palace, was erected in the years 1750-54 for the Lord High Steward A. G. Moltke. When the Royal Family became homeless after the fire of Christiansborg in 1794, Christian VII bought the palace.

After Christian VII’s death in 1808, Frederik VI used the palace for his Royal Household. The Ministry of Foreign Affairs used parts of the palace in the years 1852-85. From 1885, the palace was used exclusively to accommodate guests  and for ceremonial purposes.

However, for short periods of time, the palace housed Crown Prince Frederik (IX) and Crown Princess Ingrid as well as The Queen and Prince Henrik during the restoration of their respective palaces.

From 1971-75, the palace also housed a small kindergarten for TRH The Crown Prince and Prince Joachim, and a classroom was set up there for them later on. 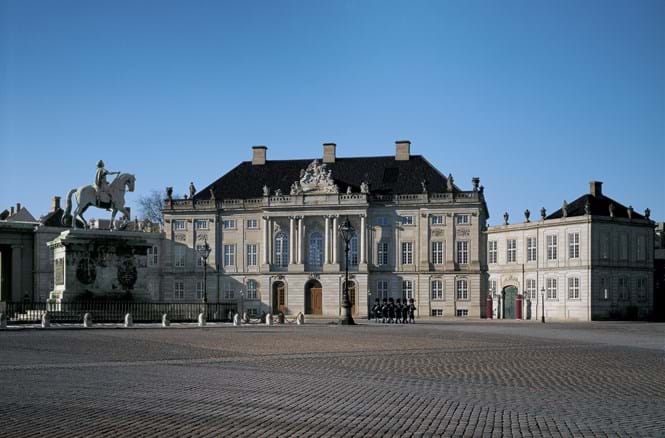 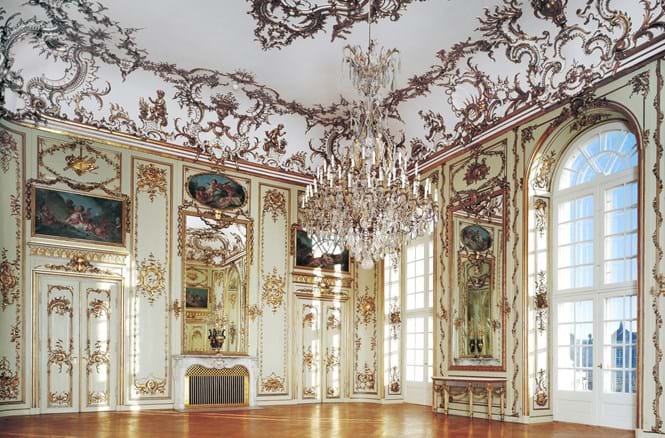 The palace was built for Levetzau. Today the palace is residence for Prince Joachim, HRH Princess Marie and HRH Princess Benedikte.

Christian VIII’s Palace, or Levetzau’s Palace, was built in the period 1750-60 for Privy Councillor Christian Frederik Levetzau. Prince Frederik, the Heir Presumptive, bought the palace in 1794 and gave the painter and architect Nicolai Abildgaard responsibility for a modernisation. When the Heir Presumptive died in 1805, his son Prince Christian took over both the palace and the architect. However, Abildgaard died in 1809, and the modernisation came to a halt. In 1839, Prince Christian became King under the name of Christian VIII, and the palace was subsequently called Christian VIII’s Palace.

The King died in 1848 and the Queen Dowager, Caroline Amalie, in 1881. From 1885, the Ministry of Foreign Affairs used parts of the palace but had to move when the it was made the residence of Crown Prince Christian (X) and Princess Alexandrine in 1898.

Ater the death of Christian X in 1947, the palace was placed at the disposal of the Heir Presumptive, Prince Knud.

In the 1980s, the Agency for Palaces and Cultural Properties initiated a much-needed general restoration of the palace. It was fitted up to house, among other things, the residence and reception rooms of the heir to the throne, stores for HM The Queen’s Reference Library and a museum for the Royal House of Glücksborg, "The Royal Danish Collections, Amalienborg". 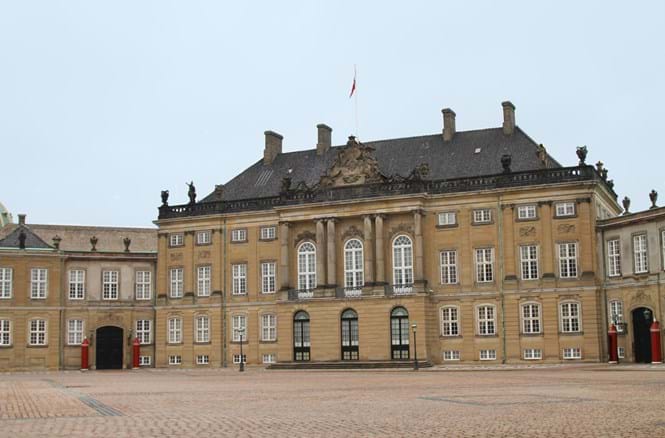 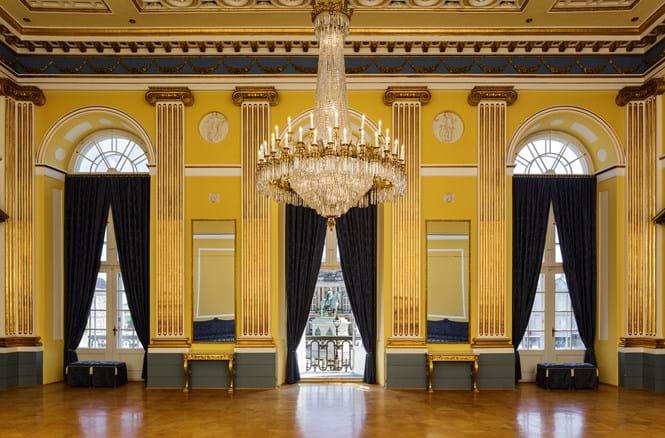 Frederik VIII’s Palace was built during 1750-60 for Baron Joachim Brockdorff. Today the palace is The Crown Prince Couple’s private residence.

Frederik VIII’s Palace, or Brockdorff’s Palace, was built during 1750-60 for Baron Joachim Brockdorff. Brockdoff died in 1763, and Lord High Steward A.G. Moltke subsequently acquired the palace. Two years later, he sold the palace to Frederik V. From 1767, the palace served as the Army Cadet Academy.

In 1934, the palace was restored in order to be used by Crown Prince Frederik (IX) and Crown Princess Ingrid. Queen Ingrid lived in the palace until her death in November 2000. 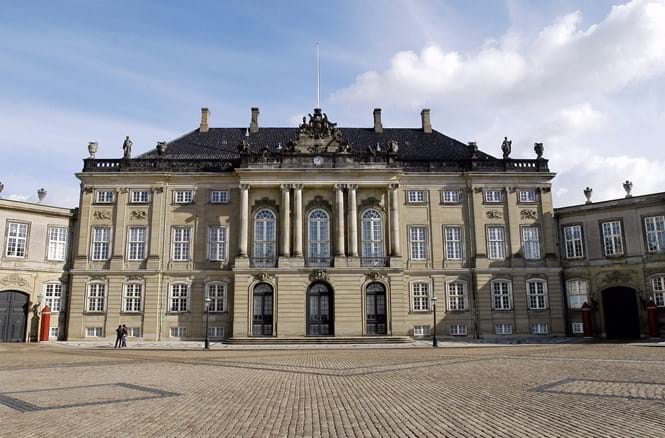 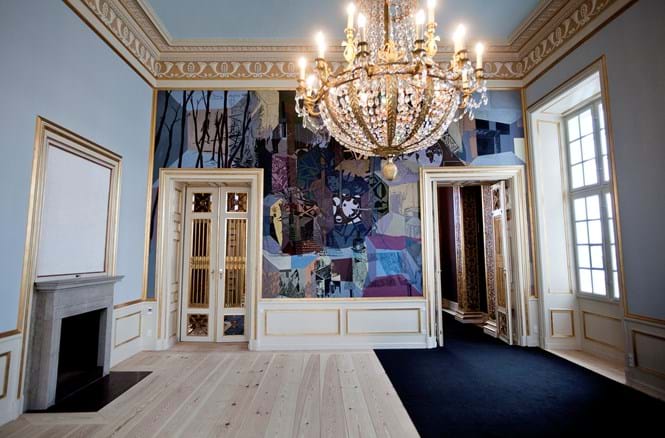 The construction of Christian IX’s Palace, or Schack’s Palace, was commenced in 1750. However, in 1754 Privy Councillor Severin Løvenskjold, who commissioned the building, had to give up in the face of the financial commitments. Countess Anne Sophie Schack took over the palace and passed it on to her step-grandson, Hans Schack.

In 1757, Hans Schack became the son-in-law of Lord High Steward A.G. Moltke, which was highly beneficial to construction work, as Moltke lent his best artists and craftsmen for the completion of the interiors.

After the Christiansborg fire, Schack’s Palace was acquired for Crown Prince Frederik (VI). The palace was connected to Moltke’s Palace by the "Colonnade", a secret passage at the first-floor level supported by eight Ionic columns, allowing the traffic to continue along Amaliegade.

The Crown Prince, who had governed the country for his sick father since 1784, became King under the name of Frederik VI in 1808. After his death in 1839, the palace was, among other things, used by the Supreme Court and the Ministry of Foreign Affairs.

In 1863, the palace was placed at the disposal of Christian IX, after whom the palace is named. "Europe’s father-in-law" lived there until his death in 1906. The home remained untouched until a registration of the estate took place in 1948.

In 1967, the palace was restored for the successor to the throne, Princess Margrethe and Prince Henrik. The Queen still use the palace as her winter residence.

The Queen delivers the New Year Address every year on 31 December at 6 pm. 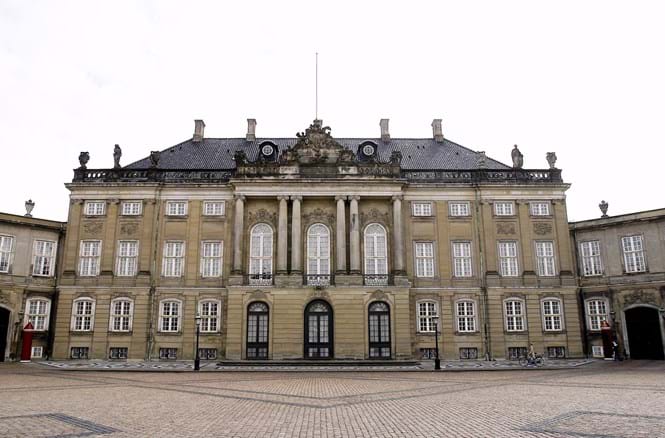