Christiansborg Palace has a more than 800 year-long history and since the beginning of the 1400s has been the state’s centre of power. Today the palace includes several institutions of central importance. The Folketing has at its disposal most of the rooms in the palace, but the Prime Minister, the High Court, and the Royal Reception Rooms are also located here.

The Royal Reception Rooms at Christiansborg Palace are located on the first floor, the so-called bel étage, in the northern part of the main wing and in the wing along Prins Jorgen’s Gaard. The rooms are used by HM The Queen for the New Year Levee, evening parties, gala banquets and ambassadorial audiences. The Royal Reception Rooms were inaugurated with a grand party on 12 January 1928, and that date is considered as the official inauguration of the palace.

The Royal Reception Rooms are richly decorated, both with artworks salvaged from the two previous palaces and with decorations made by some of the best artists of that day, as well as with a fine contemporary addition in the form of Bjorn Norgaard’s tapestries made for The Queen.

Visitors come to the Royal Reception Rooms along the King's Staircase, at the end of which, to the right, they reach the Tower Room. Here one sees a series of tapestries with motifs from Danish folk ballads, designed by Joakim Skovgaard. Across from this lies the oval Throne Room with the two thrones. The Throne Room is decorated with a large ceiling painting by Kræsten Iversen depicting Dannebrog, which according to legend fell from the sky in Estonia in 1219. Christian IX’s Apartment contains six marble busts of, respectively, Christian IX and Queen Louise, Frederik VIII and Queen Lovisa, and Christian X and Queen Alexandrine.

The Fredensborg Room is dominated by Laurits Tuxen’s large painting of Christian IX and Queen Louise surrounded by their family in the Garden Room at Fredensborg Palace. In Frederik VI’s Apartment hang four large Eckersberg paintings salvaged from the second Christiansborg Palace. The Velvet Apartment was used as the throne room until 1933, hence the high ceiling and the fine marble portals. In the Corner Apartment hang Laurits Tuxen’s large painting of “The Four Generations”, showing Christian IX and the princes Frederik (VIII), Christian (X) and Frederik (IX).

The Great Hall is the largest of the Reception Rooms, and it is 40 metres long and 10 metres high with a gallery running along its sides. Retracted into the ceiling are three large Kræsten Iversen paintings that symbolise the legislative, the executive and the judiciary powers united in the palace. The Hall was originally decorated with Christian V’s tapestries from Rosenborg Palace, but these tapestries were returned to Rosenborg when the Danish business community’s gift for The Queen’s 50th birthday in 1990, the Danish sculptor Bjorn Norgaard’s 17 tapestries with motifs selected from 1000 years of Danish history, were mounted in the Hall in connection with The Queen’s 60th birthday on 16 April 2000.

The Royal Reception Rooms are open to the public.

Gala dinner on the occasion of the 40 years anniversary of HM The Queen’s accession to the throne, 2012. Photo: Polfoto © 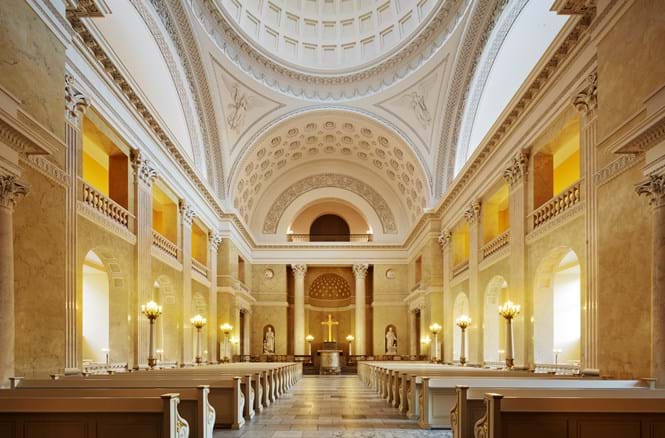