In the royal collections are large volumes of silver, glass and porcelain used for everyday purposes, festive occasions or decoration. A large part of the historic silver, glass and porcelain is still used for large events in the Royal House, while other parts have been taken completely out of use and handed over for exhibition in The Royal Danish Collection at Rosenborg Castle.

The silver collection, much of which is owned by the state, consists of service: Plates, silverware, vases, etc., along with everyday and decorative articles from many centuries. The collection contains, among other things, 800 silver plates bearing the state coat of arms, of which 100 date back to the 1700s. The plates are used together with Christian IX’s silver knives from 1864 for the New Year’s banquet and state dinners, and sometimes the tables are also set with Christian VII’s large, silver soup tureens. Among the newest silver articles is a large collection of Georg Jensen knives presented to The Queen as a gift for her 70th birthday in 2010.

Among the many decorative silver articles deserving special mention is the impressive centrepiece that court jeweller Anton Michelsen produced for Christian IX and Queen Louise’s golden wedding anniversary in 1892 as a gift from the Danish landed gentry. The set, which weighs nearly 200 kg, consists of three figure groups and two candelabras with motifs from Nordic mythology, all intended to decorate the middle of the banquet table. Michelsen is also the purveyor of a large number of the Royal House’s newer silver articles, among others, a mirror set with daisies and designed for the then-Princess Margrethe’s dressing table in 1941. 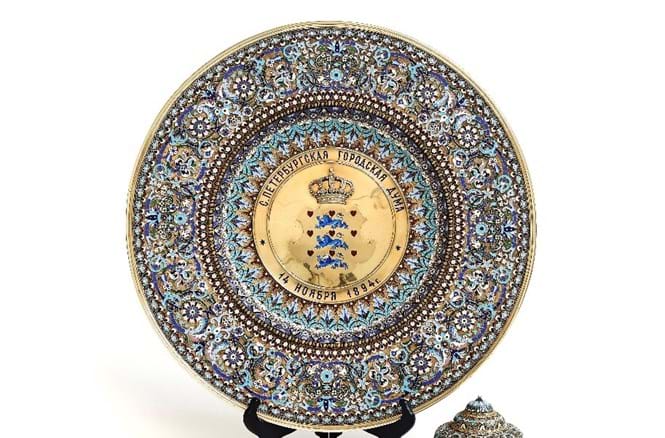 Round dish for bread in gilded silver in old Russian style with cloissoné and accompanying salt cellar. Photo: Iben Kaufmann © 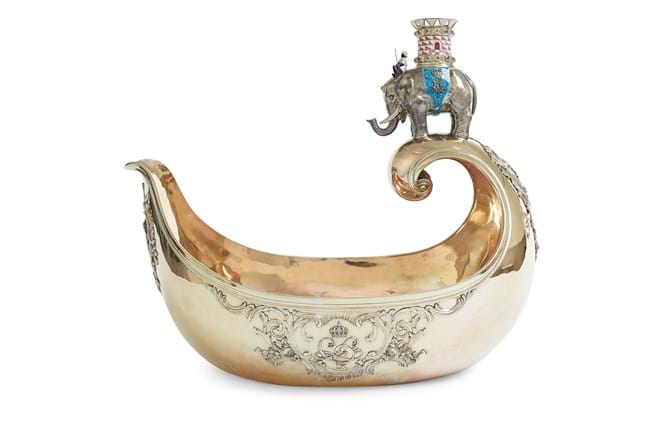 The glass collection consists of several sets of drinking glasses from the past 300 years in addition to an older collection of glass goblets primarily kept at the functioning palaces and castles. Best known in the glass collection is Frederik IV’s exceptional glass room at Rosenborg Castle. The room was established in 1714 to hold the exquisite collection of approximately 1000 glasses and glass articles, including items the king received as a gift during his 1709 visit to Venice, Europe’s leading glass producer. 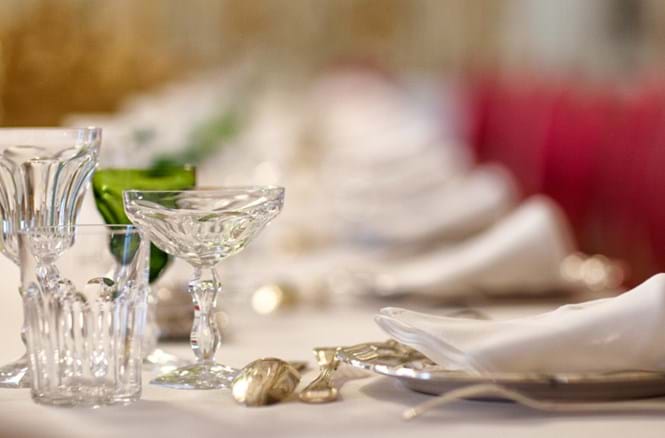 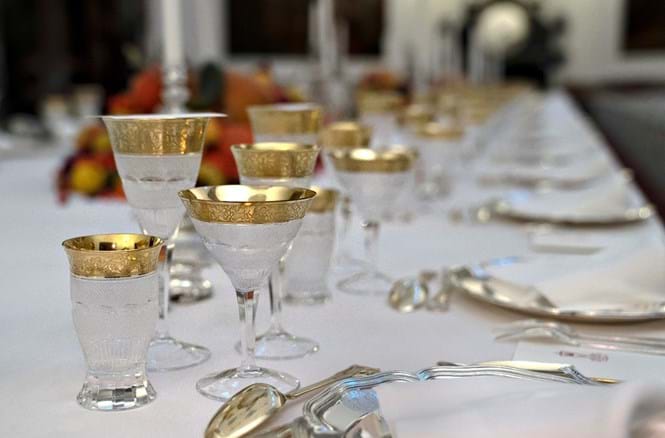 When tables are set for the large royal events, it naturally requires large volumes of porcelain, and the Royal House’s collection contains several large sets assembled through the last 300 years. A significant portion of the collection was produced by The Royal Porcelain Factory (which became Royal Copenhagen). This is especially true regarding the famous and very expensive Flora Danica set with motifs based on Danish flowers and plants. The set was commissioned by Christian VII as a gift to Catherine the Great of Russia. She, however, died before the set was finished and never received it. Other famous sets in the collections include Frederik VI’s dessert set designed for Christiansborg Palace by Hetsch along with the The Order’s Set, which is decorated with the Order of the Elephant in chains. Those two sets are still used in connection with the New Year’s banquet and other large functions in the Royal House.

Part of the Flora Danica set is exhibited in a room called ¨The Rose¨ in Christian VII’s Palace at Amalienborg. At Rosenborg Castle in the Porcelain Room, some of the Royal House’s finest porcelain pieces have been exhibited since the 1800s, including Meissen porcelain from the first half of the 1700s, Sèvres porcelain and Chinese porcelain.