The Order of the Elephant is the older and more distinguished one. In its current form, it dates back to 1580 but its historic roots go back to the foundation of the Fellowship of the Mother of God by Christian I in the middle of the 1400s. That originally-Catholic order was suspended in connection with The Reformation in 1536 but was revived during the reign of Frederik II (1559-88). The order’s badge is a white, enamelled, gold elephant decorated with a cross on one side and the monogram of the reigning monarch on the other.

The elephant carries a tower on its back and a black moor holding a spear on its neck. The badge is worn either on a chain of gold elephants and towers, or on a blue sash across the left shoulder, hence the name ¨Blue Knight¨ for a bearer of the Order of the Elephant. The most likely explanation for the choice of an elephant as the Order’s symbol is that a warrior elephant represented defenders of Christianity who were incensed at the sight of Christ’s blood. At the same time the elephant symbolises purity and chastity.

The Order’s written statutes were established by Christian V on 1 December 1693 and are still in force with one change: since 9 April 1958, women have also been eligible for admission. The Order of the Elephant has only one grade. It is awarded primarily to Danish and foreign nobility and to foreign heads of state in connection with state visits. However, there are historical and contemporary examples of the Order of the Elephant being bestowed upon Danish and foreign commoners who have made themselves particularly deserving of the honour.

At the urging of chancellor Peter Griffenfeld, the Order of Dannebrog was instituted by Christian V in 1671. To give the new order increased weight and prestige, it was claimed from the beginning that it was really the re-institution of a much older order founded by Valdemar the Victorious in connection with the Battle of Lyndanisse on 15 June 1219. According to legend, that was when the Dannebrog fell from the sky and secured the victory. For that reason, the order’s badge is a cross, and the red and white colours of the Dannebrog characterise the order’s band and cross. 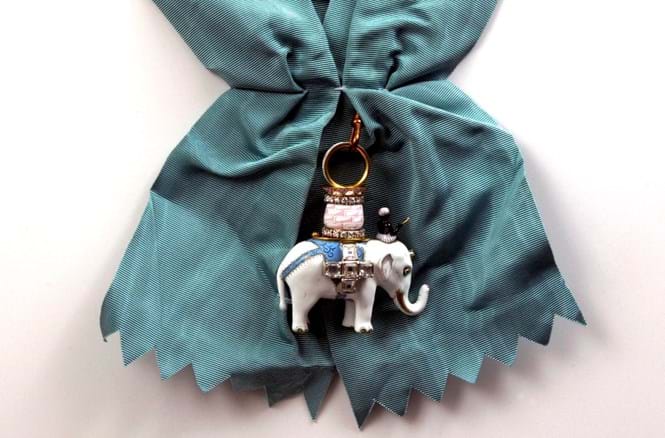 The Order of the Elephant. Photo: Finn Christoffersen ©
The Chapter of the Royal Danish Orders of Knighthood. Photo: Polfoto ©

The 1808 expansion of the order of Dannebrog

Frederik VI became king in 1808. As one of his first actions after his accession, he took the initiative to change the hitherto exclusive Order of Dannebrog into a more up-to-date order of merit with a broad scope.

The background for the King’s decision was the bourgeoisie’s rapidly growing importance in society in wake of the French Revolution in 1789 along with the increasing need to show royal acknowledgement of all levels of society. The need was made relevant by the ongoing war with Great Britain, which in 1807 had terror-bombed Copenhagen and seized the Danish fleet as part of the big clash with the Emperor Napoleon.

Denmark was an ally of France in that conflict, so the French Legion of Honour was used as the model for transforming the Order of Dannebrog. Napoleon had instituted the Legion in 1802 to reward French citizens who, regardless of status, had made special efforts for France’s cause. Based on the conclusions of a fast-working commission, the king established the new rules for the reformed Order of Dannebrog on 28 June 1808, the birthday of Valdemar the Victorious. In accordance with the King’s decision, appointments to the order thereafter were to be regarded as an outward sign of recognised civic worth, and they should in principle be granted to every deserving Dane regardless of rank or class. As a result of that widened scope, the order was divided into four increasing degrees of distinction.

The lowest degree was knight class. Following that was commander class, and above that was Grand Cross class, which corresponded with the previous White Knight distinction. Finally, the order introduced Grand Commander class as its most distinguished degree. In practice, the latter was, and is, bestowed only upon members of the Royal House. According to the King’s directive, all those decorated should, as a rule, start in knight class but could, after doing other meritorious things, advance to Commander and eventually Grand Cross, since advancement meant relinquishing the lower decoration.

At the same time, the King instituted a new special medal, the Dannebrogmen’s Medal, the use of which was further established by royal decree on 28 January 1809. It emerged that this special medal - commonly called the Silver Cross - could be given to anyone who, in a smaller circle, worked for the benefit of the fatherland.

Typical recipients of the medal were, for example, parish officials, lighthouse keepers, rescue workers, non-commissioned military officers and others who normally did not qualify for decoration with a knights’ cross. The Silver Cross could also be used as a recognition of merit for persons already decorated in one of the Order of Dannebrog’s knight classes, whereby it almost had the status of an interdisciplinary badge outside of the actual classification.

The provisions of the 1808 reorganisation basically remain valid today. However, in 1864, the commander class was divided into two: Commander 1st class, and Commander 2nd class. The same happened in 1952 with the knight class, which was divided into Knight and Knight 1st class. At the same time, the name of the Dannebrogmen’s Medal was changed to the Order of Dannebrog’s Medal and got a narrower scope than before.

There are two versions of the Medal of Merit. One is gold (referred to as F.M. 1) and is only used on extremely rare occasions. The other version is silver (referred to as F.M.). Today, it is given mainly for at least 40 years of uninterrupted civil or military service to public servants who do not qualify for a knight’s cross. On the front, the medal has a profile portrait of HM The Queen and the inscription, ¨Margareta II – Regina Daniæ¨, and on the back side is the word, ¨Fortient¨, surrounded by a wreath of oak leaves. The recipient’s name is engraved on the medal’s edge indicating that, in contrast to the knight’s cross, it remains the property of the recipient. The medal is worn on a red cross ribbon with a white cross - women wear the medal in an equivalent bow.

By ordinance on 7 October 1981, The Queen directed that medal recipients, like those decorated in the knights’ orders, should be invited to submit their autobiographies to the Chapter of the Royal Orders of Chivalry.

The Royal Medal of Reward was established by Christian IX by ordinance on 4 September 1865. The provisions for the medal’s use are renewed with every accession of a new monarch. The current statutes were adopted 1 November 1972 with minor changes made on 28 November 1986 and 25 January 1988.

The medal can be either gilded or silver and either with or without crowns. The abbreviated references are B.M. 1* (gilded with crown),  B.M. 1 (gilded), B.M.* (silver with crown) and B.M. (silver). On the front, it bears a portrait of The Queen in profile and the inscription, ¨Margareta II – Regina Daniæ¨, and on the back is a wreath of oak leaves. The recipient’s name is engraved on the edge to show that the medal is the recipient’s personal property. It is worn on a red cross ribbon with a white cross.

The medal is given without prior recommendation from some public authority. Today, it is mainly given in appreciation to persons who have served the same private employer for 50 years or, for those whose employment relationship has ended, at least 40 years of loyal service.

By ordinance on 7 October 1981, The Queen directed that medal recipients, like those decorated in the knights’ orders, should be invited to submit their autobiographies to the Chapter of the Royal Orders of Chivalry.

The Chapter of the Orders

The Chapter of the Royal Orders of Chivalry - commonly called the Chapter of the Orders - was set up in connection with the Order of Dannebrog’s expansion in 1808 to assist the monarch with the administration of the orders. The use of the ecclesiastical-sounding word ¨Chapter¨ in this context is a reminder of the orders’ historical roots in medieval monasticism and religious orders of knighthood.

According to Frederik VI’s directives, the Chapter of the Orders was intended to fill two functions. The first was, in the larger sense of the word, to work as a reconciliation commission in connection with eventual disputes between members of the orders. This function has long since ceased.

The other main function was to manage the daily administration of the orders. In addition, it also originally had the task of organising and carrying out the annual ceremonial knighthood celebrations for the two orders, which were written into the statutes from 1693 but which had not been held for many years. Frederik VI, however, wanted to revive those celebrations, and that was the real basis for the originally-abundant staffing of the Chapter of the Orders. However, there was only a brief revival.

The first celebration took place on Frederik VI’s birthday on 28 January 1809 and the last took place in 1813. Thereafter, the woeful consequences of the Napoleonic Wars for Denmark put a permanent end to the display of such festivities. Since then, the Chapter of the Orders has primarily carried out daily administrative duties.

The secretariat of the Chapter of the Orders prepares knights’ diplomas and diplomas related to conferral of medals in accordance with the royal ordinances, and from there the badges of the orders and the medals are sent to recipients. It is also the secretariat’s responsibility to ensure that badges are returned the Chapter of the Orders when recipients die or when those decorated advance to a higher grade in the Order of Dannebrog. In contrast to medals, badges remain the property of the Sovereign of the Orders.

Since 1808, the post of Historiographer of the Royal Orders has been attached to the Chapter of the Orders. Originally, the Historiographer’s main function was to keep records of knights’ genealogies and lives as the basis for developing their obituaries, which according to the rules should be read aloud at the orders’ feasts in honour of those who died during the previous year. The demise of the feasts, however, made this practice obsolete.

But another practice gradually developed. In connection with their decoration, knights began submitting written autobiographies to the Chapter of the Orders. That has been the case for Order of Dannebrog recipients since 1904 and for medal recipients since 1981. Ensuring that this and the proper archiving of the autobiographies happen are still among the Historiographer’s main official duties. Today, the Chapter’s archive contains around 40,000 autobiographies. They all date after 1884, when the older collection perished in the fire at Christiansborg Palace that year.

But even in reduced form, the collection of autobiographies represents a unique and rich culture-historical treasure, which is used frequently by researchers from Denmark and from other countries. It is the responsibility of the Historiographer of the Royal Orders to make sure that the established rules for gaining access to the collection are complied with.

The Order of the Dannebrog. Photo: Polfoto © 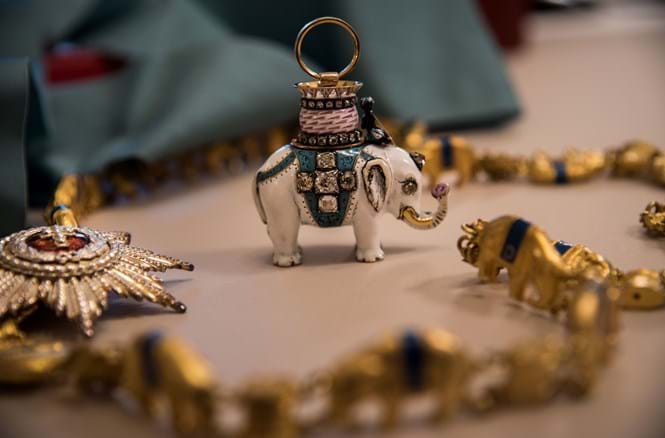