HM The Queen's Reference Library is the private library of the Danish Monarch and, as such, is the second ‘Royal Library’ in Denmark. The first was founded by Frederik III in the mid-1600s and is known to this day as "The Royal Library" (Det Kongelige Bibliotek). It is now the national library of Denmark and the country's principal research library for the humanities and the social sciences. It was opened to the public in 1793 and became state property in 1849 when the absolute monarchy was abolished in Denmark.

Christian VIII's Palace is home to the offices and most of the library. Photo: Kongehuset ©

The growth of The Royal Library and its physical removal (in 1673) from the Royal residence made it more difficult for the king to use at will, creating the need for a new royal library to be collected, which was more easily accessible. In 1746 HM The King’s Reference Library (H.M. Kongens Haandbibliotek) was founded as an institution by Frederik V (1746-66) on his accession to the throne. It was housed in the recently constructed Christiansborg Palace in Copenhagen. Initially this library was envisaged as a relatively small private library at the king’s personal disposal for study and reference. As such, it was set up in a suite of rooms at the palace immediately below the king’s apartments on the floor above. It remained here for the first half-century of its existence, i.e. throughout the reign of its founder and for the first 28 years of the reign of his son, Christian XII (1766-1808).

In 1794 a great fire completely destroyed Christiansborg Palace and most of the library is thought to have been lost. The library was reconstructed by the Prince Regent, Frederik (VI) who had been Regent since 1784 (he acceded the throne in 1808-39). It was situated in his new residence at Amalienborg. It was to remain here until 1840 when, due to the shortage of space created by the addition of the vast collection of the new king, Christian VIII (1839-48), it was moved back to the newly reconstructed Christiansborg Palace. The Royal Family, however, continued to reside at Amalienborg for the most part, and since then the library has never been an integral part of the Royal Family’s apartment. The library remained at Christiansborg Palace until 1884 when fire once again destroyed the palace. This time the library was saved, though much of it was treated roughly; many of the books were simply thrown out of the windows. The books moved back to Amalienborg again, to remain there until 1922 when they were returned a third time to the renovated Christiansborg Palace. In 1985 the library took yet another journey back to Amalienborg though this time not because of fire but because of shortage of space and of The Queen’s wish to have it closer to her primary residence. Since then Christian VIII's Palace has been home to the offices and most of the stacks of the library, although a small selection of the books has remained at Christiansborg Palace to fill the shelves of the two ornate library rooms that are part of the Royal State Apartments. 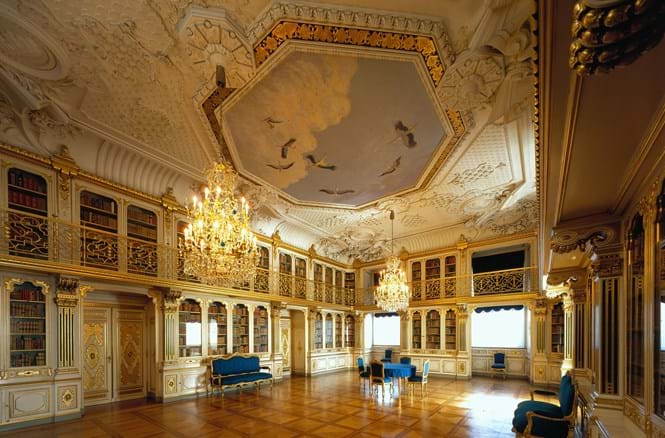 For the first century and a half of its existence the library remained in the possession of the Danish kings by force of tradition, inherited from king to king. To formalise the tradition and to ensure the library’s continued possession by the monarch, it has since 1910 belonged to the Entailed Estate of the Danish Royal Family. This means that the library is not the personal property of the monarch but preserved by him or her for future generations. Thus the library is at the disposal of the current monarch at any time who, together with the throne, inherits the right to use it and the duty to pass it on undivided to his or her successor. Very little is known about the use of the library during the earliest part of its life until the fire of 1794. In subsequent decades, until the reign of the present queen, it seems to have been used almost exclusively by members of the Royal Family and the Royal Household. For much of the time since the mid-19th century it appears to have led a somewhat secluded life. Before this time, however, the library had enjoyed a period of intense activity during the reign of Christian VIII who, with his wide-ranging intellectual and artistic interests, had created an active intellectual environment in his palace centred on his valuable collections of art, classical antiquities, coins and natural specimens. The library became a part of this activity and was involved in a number of ambitious scientific and scholarly projects which, however, due to the king’s early death, were only partially realised. In modern times, during the reign of the present queen (since 1972) there has been a considerable increase in the activities of the library, which also includes the cataloguing of The Queen's ever growing personal collection which remains strictly private.

The library today serves four main functions: Firstly, as a part of the Royal State Apartments at Christiansborg Palace it contributes to the setting for official royal arrangements including the government. Secondly, as part of The Royal Danish Collection it functions as a museum of books and book binding, and contributes to the preservation of the national literary and artistic heritage. Thirdly, as a working reference library it serves the needs of Her Majesty, the Royal Family, and the Royal Court. Finally, the library serves a public function as a research library for Danish and foreign researchers and scholars who, upon application, may be granted permission for study, reproduction or exhibition of rare or unique material. This is today its main function.

Since 2014, the library functions as a department of The Royal Danish Collection.

The Reference Library today keeps most, if not all the books, maps, prints and other related material collected by the last nine kings since the Library’s founder, Frederik V. The collections of four of their queens are also more or less entirely preserved. There are books belonging to other members of the Royal Family but not as many. The Reference Library comprises eight separate collections of varying size and content, all listed below. The catalogues of the first four are in the process of being made available online.

The Book Collection currently comprises approx. 3000 m of shelf space, estimated at 70-75,000 titles or almost 100,000 volumes. The oldest books are about 500 years old, dating from the late 15th and early 16th centuries, but these are rare. There are a greater number of 18th century volumes but the bulk of the collection (at least 90%) dates from the 19th and 20th centuries.

For the most part the books are arranged by subject according to a system introduced at the beginning of the 20th century. There has been no systematic registration of provenance (although most books are embossed with the monogram of the monarch in whose reign they are acquired). The only collections to have been preserved as separate entities are those of the two last kings, Christian X (1912-47) and Frederik IX (1947-72), Queen Caroline Amalie (1796-1881), wife of Christian VIII, and Queen Ingrid, wife of Frederik IX. Christian VIII's (1839-48) vast collection has recently been partially reconstructed and arranged separately.

Acquired by purchase and numerous gifts, the book collection as a whole has a varied and rather eclectic nature. Due to its origin no single subject is comprehensively or systematically represented. It contains valuable, rare and, in some cases, unique material on a wide range of subjects. Even so, there is a marked similarity in the subjects that have continued to dominate the collection. Principal subjects include history, mainly of European countries, art, theology, geography and travel and literature. Most are Danish but there are also many of English, German, French and Italian origin, as well as smaller numbers of books from numerous other countries. Books on Denmark and Danish issues, including other countries and territories that were formerly part of the Danish monarchy in Europe and further afield, naturally occupy a very large part of the collection.

Viewed in its entirety, the collection reflects, often in great detail, the official and private histories, personal interests and tastes of the kings who added to it, as well as their public roles as Head of State. In a multifaceted way it presents a picture of the status and function of the Royal House in Danish society over the last 250 years, from the high point of absolutism to the constitutional monarchy of today. About 4-500 books and periodicals are acquired annually, almost 80% of which are gifts.

The Manuscript Collection comprises about 5 metres of shelves and covers much the same subjects as the book collection. Rather random in its composition, it includes some valuable items such as the Norske Reise anno 1733 [Tour of Norway 1733] which provides a lavishly illustrated account of the journey to Norway by Christian VI and his entourage in that year (published by the library in a facsimile edition in 1992); or the Samples of Greenlanders’ Drawings collected in 1857-61, containing about 100 original examples of early Eskimo art (also published in a facsimile edition in 1980). Each year this collection grows a little.

The Map Collection, stored naturally in the ‘map room’ is particularly valuable. It contains 400 atlases and approx. 3000 individual maps, many of them in manuscript form. The oldest maps date back to the late 17th century but most are from the early 18th – mid-19th century. The maps are primarily of territories ruled by the Kings of Denmark but the collection covers the whole world. Many maps show military operations and fortifications.

The collection also includes a section of architectural drawings by prominent Danish 18th century architects. A special section of the collection is the Atlas of Juliane Marie which contains numerous maps and prospects of all parts of the world. It was collected in the mid-18th century by Queen Juliane Marie, wife of Frederik V. Bound in 37 volumes it now contains 2798 sheets. The Map Collection is practically a closed collection with hardly any acquisition.

The Collection of Prints includes a broad spectrum of material including drawings, water-colours, etchings, lithographs, etc. Of particular interest are original drawings and water-colours by distinguished Scandinavian and German artists, primarily of the 19th century. There is also a huge collection of old and new photographs on a great variety of subjects; photographic material is constantly being added to the collection.

Several thousand of mostly older photographies from the collection are being made publicly accessible via the online database “Den kongelige fotografisamling”, which can be can found via the homepage of HM The Queen's Reference Library.